Immigration has long played an important role in Manitoba’s growth and prosperity. Honouring that great tradition, we continue to promote our province as the destination of choice for skilled immigrants and immigrant entrepreneurs, and to welcome refugees and family sponsored newcomers from around the world.

Note: Data in this report was created by the Province of Manitoba using IRCC Q2 2017 immigration data.

By July 1, 2016, Manitoba was estimated to have more than 1.32 million people representing about 3.6 per cent of Canada’s total population. In 2016, 16,821 permanent residents (5.7 per cent of total immigration to Canada) chose Manitoba as their immigration destination. Based on labour force survey data, of all landed immigrants in 2016, 20.7 per cent made up Manitoba’s labour force with the second highest employment rate in Canada and second lowest unemployment rate across all jurisdictions. 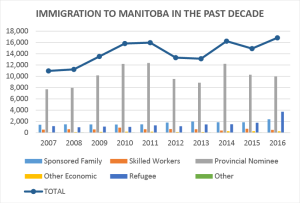 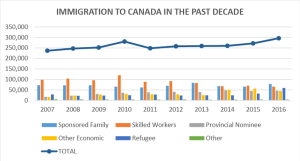 Table 1: Immigration to Manitoba in the Past Decade

Table 2: Immigration to Canada in the Past Decade

In 2016, immigration to Manitoba increased 23.8 per cent from 2015. This increase was largely a result of 1,233 Syrian refugees that were resettled to Manitoba as part of the National Syrian Refugee Resettlement Initiative.

Immigration by Province or Territory

In 2016, Winnipeg continued to rank 6th among Canadian cities as a destination for immigrants, as it did in 2014 and 2015 following Toronto, Montreal, Vancouver, Calgary, Edmonton. Together, these cities attracted about 70 per cent of new permanent residents.

The largest driver of economic growth in our province is the Manitoba Provincial Nominee Program (MPNP). On an annual basis the MPNP nominates skilled workers and business investors who are best suited to contribute to our economy. 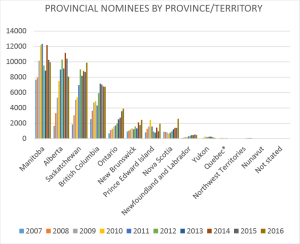 In the last decade, roughly 20 per cent of provincial nominees settled outside of the Winnipeg census subdivision, compared to 12 per cent of those from other immigrant classes.

Note: Due to privacy considerations, cells with less than 5 must be suppressed and replaced with the notation “–” when releasing/publishing.

To achieve family reunification, eligible Canadian citizens and permanent residents living in Canada can sponsor their family members. In 2016, Manitoba received 2,379 permanent residents who accounted for 14 per cent of the Sponsored Family category. The top source countries accounting for 58.1 per cent of this immigration category include India, Philippines, China and the United States.

Manitobans continued welcoming refugees from all over the world into their communities and provided them with support. Of all permanent residents to Manitoba in 2016, 22.2 per cent landed as refugees and protected persons (3,370), the highest number of refugees since 1990 and the highest number per capita in Canada. Manitoba resettled 6.3 per cent of all refugees and protected persons to Canada including approximately 5.3 per cent of Canada’s government-assisted refugees (1,271) and 11.1 per cent of privately sponsored refugees (2,069). Thirty-four per cent of resettled refugees to Manitoba came under the National Syrian Refugee Resettlement Initiative. Eritrea, Somalia, Ethiopia and Democratic Republic of Congo were among the other top countries affected by conflict and war in 2016. 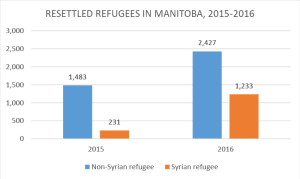 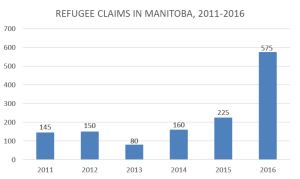 Table 10: Resettled Refugees Admitted to Manitoba by Country of Citizenship

Immigration continues to benefit regional communities. Between 2007-2016, approximately 114,190 immigrants have settled in the Winnipeg Economic Region, while more than 27,640 immigrants have settled in other economic regions outside of the Winnipeg. In 2016, 17 per cent of newcomers chose to live outside of Winnipeg (2,807) and all economic regions of the province saw increases in immigration compared to the previous year with the exception of Southwest and Interlake.

Rank is based on the municipalities with the highest 2016.
The total indicated is the sum of the top ten for each respective year.

In 2016, Philippines, India, Eritrea, Syria and China ranked among the top five source countries for immigrants to Manitoba, representing 61.1 per cent of all immigrants. Eritrea  increased to third place, largely due to the private sponsorship of Eritrea refugees. On a national level, and with the exception of Syria, Philippines, India and China continue to rank as the top three source countries to Canada since 2014.

Rank is based on the municipalities with the highest 2016.
The total indicated is the sum of the top ten for each respective year. 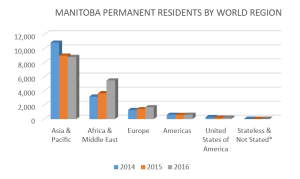 Newcomers are important contributors to Manitoba’s population growth and to the rejuvenation of the labour force. In 2016, the immigrant media age was 28 years while the media age of Manitobans was 38 years. Male and females numbers were roughly equal. 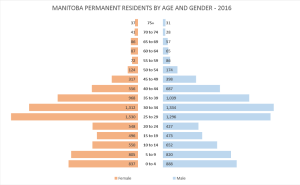 Rank is based on the highest number of landings by mother tongue in 2016.

In 2016, the percentage of Manitoba’s immigrants who identified English as an official language spoken continued increasing to 67.0 per cent from 63.7 per cent in 2010.

In 2016, Manitoba welcomed 345 immigrants who identified French as their official language spoken, representing 2 per cent of all immigrants to Manitoba. From 2007 to 2016, nearly 4,000 immigrants have arrived in Manitoba with the ability to speak French.

Manitoba supports the Manitoba francophone community’s goal of increasing francophone immigration. In 2016, 4.2 per cent of all MPNP nominations were Francophone and approximately 70 per cent of all French-speaking immigrants came through the MPNP. The top source countries for all immigrants who identified French, as well as both French and English, as their official language spoken were France, Philippines, Democratic Republic of Congo (DRC), Cameroon, Morocco and Ivory Coast. 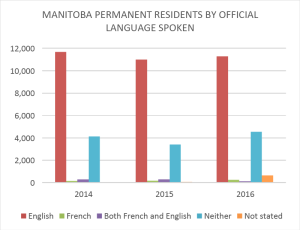 To ensure that immigrants can contribute their skills and experience to Manitoba’s economy, the Province is renewing the MPNP to strengthen partnerships with industry and post-secondary institutions. In addition, the Province continues to invest in successful employment programs like Manitoba start which also provides guidance to professionals needing to have their international qualifications recognized.

Table 18: Manitoba Permanent Residents by Level of Education (Aged 25 years and over)

Rank is based on the highest number of landing by occupation for economic principal applicants only in 2016.

Based on the National Occupation Classification System, in 2016, 71.0 per cent of principal applicants under the economic category were considered highly skilled (NOC 0, A and B) and had previous occupations in:
• Sales and service
• Business, finance and administration
• Natural and applied sciences and related occupations
• Trades, Transport and Equipment Operators and Related Occupations

In Manitoba, temporary residents who have worked for more than six months, or have graduated from a post-secondary program in the province, have the opportunity to apply to the MPNP and become permanent residents. In 2016, Manitoba received 6,413 temporary workers through the federal International Mobility Program and 856 through the Temporary Foreign Worker Program (with a Labour Market Impact Assessment). Since 2005, 8,482 temporary foreign workers have been nominated for permanent residence through the Manitoba Provincial Nominee Program. In 2016, Manitoba approved 1,491 employer registration certificates to support employers to recruit or retain 3,740 positions. 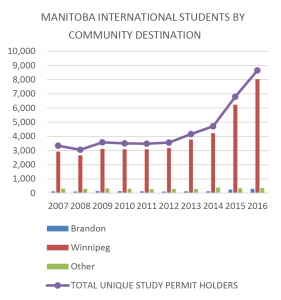 Rank is based on the highest number of study permits by country of citizenship in 2016.

1 Provincial Nominees are a subcategory of the Federal Economic Class.

5 Stateless & Not Stated also includes world region data which, due to privacy considerations, has been supressed.

6 Including no education level – Due to operational adjustments to IRCCs administrative data files, data under the variable “Level of
Education” are preliminary estimates and are currently under review.

10 This term refers to permit holders with a valid permit that was also signed in the given year.

12 The total unique count may not equal to the sum of permit holders in each program as an individual may hold more than one type of
permit over a given period.